Ch is a complete C interpreter that supports all language features and standard libraries of the ISO C90 Standard, but extends C with many high-level features such as string type and computational arrays as first-class objects.

For some tasks, C and its compile/ link/execute/debug process are not productive. As computer hardware becomes cheaper and faster, to be productive and cost effective, script computing in C/C++ can be an appealing solution. To this end, we have developed Ch, an embeddable C/C++ interpreter for cross-platform scripting, shell programming, 2D/3D plotting, numerical computing, and embedded scripting [1].

Ch supports most new features added in the ISO C99, such as complex numbers, variable length arrays (VLA), IEEE floating-point arithmetic, and type-generic mathematical functions. C programmers are encouraged to use these new features because they significantly simplify many programming tasks. Ch also supports classes in C++ for object-based programming.

The relationship of Ch to some of these languages and software packages is shown in Figure 1.

Figure 1: Relationship of Ch to some other languages and software packages. 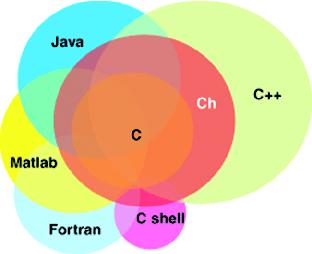 Unlike other languages and software packages, Ch bridges the gap between low-level languages and very high-level languages. As a superset of C, Ch retains low-level features of C such as accessing memory for hardware interface. However, unlike C, Ch can be considered a very high-level language (VHLL) environment. It makes hard things easy and easy things easier. Ch extends C with many high-level features such as string type and computational arrays as first-class objects, as in Fortran 90 and MATLAB for linear algebra and matrix computations. Ch supports shell programming with a built-in string type. Some problems, which might take thousands of lines of C code, can be easily solved with only a few lines of Ch code.

Furthermore, Ch is designed to be platform independent. It can run in a heterogeneous computing environment with different computer hardware and operating systems including Windows, Mac OS X, Linux in both Intel and PPC architectures, UNIX, FreeBSD, and QNX. A program developed on one platform can run on any other platform.

In this article, I will present some unique features offered by this C/C++ interpreter for script computing and illustrate how they are used in applications. Examples presented are portable across different platforms. One can readily try these examples by downloading Ch from http://www.softintegration.com/.

I regularly teach engineering students on introductory computer programming in C. I use Ch interactively in classroom presentations using a laptop. Ch allows me to illustrate programming features quickly, especially in answering students' questions. Learners can also quickly try out different features of C without tedious compile/link/execute/debug cycles. To help beginners learn, Ch has been specially developed with many helpful warning and error messages, as an alternative to crashing with cryptic, arcane messages such as "segmentation fault" and "bus error."

All C statements and expressions can be executed interactively in a Ch command shell as shown in Figure 2. The output from the system resulting from executing an expression, statement, or command in Ch is displayed on the screen. For example, the output "Hello, world" can be obtained by calling function printf() interactively as shown in Figure 2. Note that the semicolon at the end of a statement in a C program is optional when the corresponding statement is executed in command mode. There is no semicolon in calling function printf in the previous execution. The default prompt in a Ch shell can be reconfigured. For simplicity, I'll only show the prompt > in a Ch command shell for the rest of this article.

Figure 2: The user interface in a Ch command shell.

If a C expression is typed in, it will be evaluated by Ch. The result will then be displayed on the screen. For example, if the expression 1+3*2 is typed in, the output will be 7, as shown:

Any valid C expression can be evaluated in a Ch shell. Therefore, Ch can be conveniently used as a calculator. As another example, one can declare a variable at the prompt, then use the variable in the subsequent calculations:

In these C statements, variable i is declared as int type with 4 bytes. Then, the integer value 30 for i is then displayed in decimal, hexadecimal, and binary numbers. The integral constants in different number systems can also be assigned to variable i. The 2's complement representation of the negative number -2 is displayed as well. Characteristics for all other data types in C can also be presented interactively. Different format specifiers for the families of input function fscanf() and output function fprintf() using file streams opened by function fopen() can also be tried out this way. All C operators can be used interactively:

The concept of pointers and addresses of variables can be illustrated as shown:

In this example, the variable p of the pointer to int points to the variable i. The relation of arrays and pointers can be illustrated as follows:

Expressions a[1], *(a+1), *p, and p[0] all refer to the same element. Multidimensional arrays can also be handled interactively. The boundary of an array is checked in Ch to detect potential bugs; see Example 1.

The allowed indices for array a of five elements are from 0 to 4. Array s can only hold five characters including a null character. Ch can catch bugs of existing C code related to the array boundary overrun. The alignment of a C structure or C++ class can also be examined as shown: